You are cordially invited to join us on Tuesday 25th August at 7.30pm for a poetry reading like no other: Kelvin Corcoran with The Republic of Song (Parlor Press, 2020), Aidan Semmens with There Will Be Singing (Shearsman, 2020), Maria Stadnicka with Somnia (Knives, Forks and Spoons, 2020).

There Will Be Singing: Aidan Semmens’s fifth collection of poems moves from the range of the world to the deeply personal, always placing the detail in historical context. Employing a variety of poetic techniques, he moves from the moral ambiguities of empire to the run-in to Brexit; from a reworking, forty years on, of the poem for which he was awarded the Cambridge University Chancellor’s Medal, to the breakdown of language suffered by his mother after an ultimately fatal stroke.

“There’s an exuberance of the poet in full stride. Typically, the phrasing and imagery are seductive and of the physical world being lived. Learning is carried lightly, erudition not pushed at the reader but drawn into the lyricism.” —Kelvin Corcoran

Somnia: included among the best books to read during pandemic by The Telegraph Arts critics, Somnia is a series of dark, surreal fables, often set in war-torn state – (Tristam Fane Saunders, The Telegraph). ‘Stadnicka’s poetics is one of craftmanship, wherein she carefully walks the tightrope of surreal poetic metaphor and the gritty realism of investigative journalism and broadcasting’ (Bryony Hughes, Stride); Somnia is accomplished and timely, built on acute observation and drawn without judgement. The poems focus on the darker sides of humanity, the intrusion on every day lives by the political forces and show solidarity with those simply trying to protect family and survive’ (Emma Lee, The Journal).

The reading will take place on the Zoom platform and it is free. Email mariastadnicka@yahoo.co.uk for the link and password.

Look forward to seeing you there!

Aidan Semmens, There Will be Singing is available at Shearsman Books, Poetry Book Society.

Kelvin Corcoran, The Republic of Song is available at Parlor Press.

‘Poetry at Pembroke’ is a series of poetry readings organised by Peter King, lecturer in philosophy at Pembroke College. The beautiful grounds bring together a wide range of national and international poets, readers, critics, musicians, students, on Mondays at 6pm.

With great joy and enthusiasm, I will be performing at Pembroke on Monday 19th February, at 6pm with the composer Janet Davey. 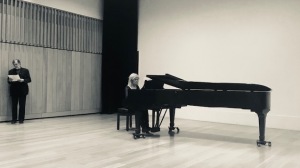 Janet and I have a few things in common. Radio broadcasting. Both involved in news. Janet worked for the BBC World Service, I worked for Radio Europa Nova and then for Radio Hit Romania. We share the love for music, for poetry and for sound. And we share a common memory. The Chernobyl accident 26th April 1986. I was eight years old and went to a nearby gymnasium school. 26th April 1986 was a Saturday. In those days, we went to school six days a week and, on Sundays, we had homework. There was nothing else for us children to do. We had no television during communism, there were no magazines and we had only two newspapers. I had started to write poetry by that time; write on old notebooks, on my mother’s factory coupons, on food wrapping paper. We had no books at home, so I wrote to have something to read in the evenings.

Once a month after that Saturday, the school’s paediatrician would come to deliver our iodine tablets quota. We had to swallow one every day for almost a year. We kept breathing and eating and learning and sleeping and growing, not knowing why the iodine was good for us. The boys mostly played with the sweetish small tablets or used them as crayons. I was a short-haired nervous girl. Shy and small for my age, and I think I took them all, with precision. Or maybe for fear of being publicly reprimanded during political propaganda lessons we had on Wednesdays.

Around the same time, Janet was in London producing a live telephone programme, with Sue MacGregor between London and Moscow for BBC World Service and BBC R4. Jan noticed on the “wires” a cloud over Finland and more. The interviewee, set up by Jan, was Georgi Arbatov, Soviet spokesperson. He was asked about this cloud……and told the world. The rest is history.

These two journeys met 31 years later. The composer Janet Davey and I will be performing at ‘Poetry in the Pink’. I will be reading from my collection ‘Imperfect’ published by Yew Tree Press (Philip Rush) and the forthcoming book ‘Uranium Bullets’, with original piano music and orchestration produced by Janet Davey’s grace.

Thank you, Peter King for your brilliance in promoting poetry and thank you, Janet Davey for your superb music. 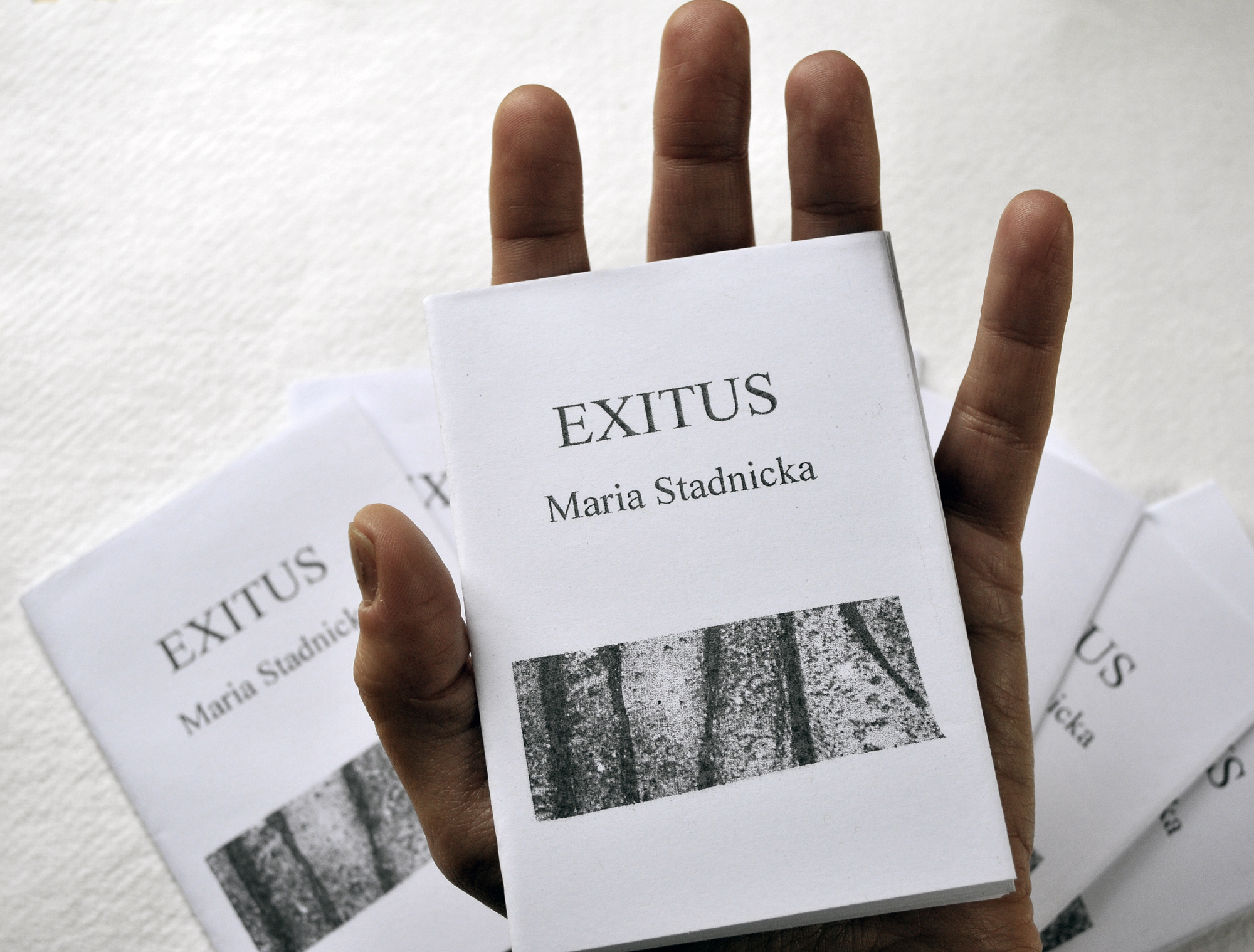 Smallminded Books is a beautiful project created by Rupert Loydell in collaboration with poets across the country and explores the concept of poetry as a gift token. It is about publishing small, very small books, in limited edition. As small as my palm, as big as my heart. Little books which are free and can be kept in your wallet, in your pocket, in …your other books. But mostly, they need to be read.

This new collection contains seven small books: Unspoken by Clark Allison, really there by John Martone, Fresh Roses by Sheila E. Murphy, ‘my name means the shape I am’ by Patricia Farrell, An enjoyable night was had by all by Mischa Foster Poole, Prayerbook for Trees by Anna Cathenka and EXITUS by Maria Stadnicka.

The books have been edited and designed by the poet and artist Rupert M. Loydell and published by Smallminded Books.

I salute this brilliant initiative with great joy and excitement and I am offering ten free copies of EXITUS, as a gift, to celebrate our beautiful language. To celebrate this project, the imagination, the playfulness and the creative energy which comes with poetry.

If you would like your free copy, please email me at mariastadnicka@yahoo.co.uk.