Maria Stadnicka is a writer, editor and freelance journalist based in Gloucestershire, United Kingdom. She is currently an associate lecturer at University of the West of England, Bristol, UK and PhD researcher exploring psycho-social aspects of migration and socio-cultural trauma in Britain. She completed her MA in Creative and Critical Writing at University of Gloucestershire. She read poetry at Stanza and Edinburgh Fringe Festival, London, Oxford, Bristol, Cheltenham Poetry Festival, Plymouth Language Club, Stroud Book Festival, Tears in the Fence Festival, Winchester University. Published collections: 'Buried Gods Metal Prophets' (2021), 'The Geometric Kingdom' (2020), ‘Somnia' (2020), 'The Unmoving' (2018), 'Imperfect' (2017). Follow on Twitter: @MariaStadnicka Copyright notice: © Maria Stadnicka, 2007-2022. All Rights Reserved. All works, writing, images, and information found herein are protected under the Copyright, Designs and Patents Act 1988. Any unauthorized reproduction or usage is in direct violation of the law and is strictly prohibited. No part or parts of this content may be reproduced, copied, modified, published, or constructed from in any way without the express, direct written permission of Maria Stadnicka.

I went out to town and took pictures
of people in queue at the shopping mall.
A third of them had been there since Friday;
pilgrims waiting for new prayer beads.

They sat on the pavement holding
their thoughts in tightly zipped handbags.
The sun kept quiet in one corner watching
the autumn busking outdoors
when a beggar stopped, asking everyone
for directions to the nearest abattoir.

Nobody knew precisely where the roads led
but smiled back at him
through the surveillance cameras. 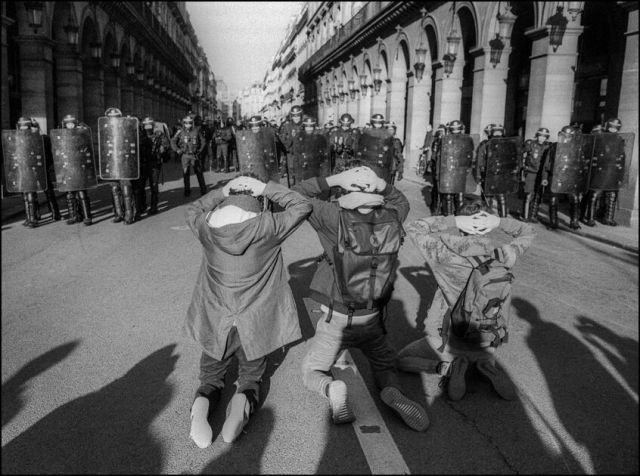 I spy with my little eye something beginning with…..P. [I can see you looking around.] YES! Correct! You spotted them too. P-rotests.

Three months of P-rotests in France. The revolt started in November last year with the ‘gilets jaunes.’ The P-rotesters have called for lower fuel taxes, reintroduction of the solidarity tax on wealth, a minimum wage increase, the implementation of Citizens’ initiative referendum and Emmanuel Macron‘s resignation as P-resident of France. From yellow vests, the social unrest extended to include the ‘red P-ens’ when six teachers launched an online campaign against low P-ay and untackled aggression against teachers in schools and colleges. In a few weeks, the movement gathered over sixty thousand members, demanding P-ay renegotiations and P-olicy changes.

Further on, from ‘red P-ens’ to ‘red scarves.’ At the end of last month, a counter-demonstration occurred in Paris by a group identifying themselves by the ‘foulards rouges’ (red scarves) they chose to wear. The ‘red scarves’ are against the ‘yellow vests’ and reject the threats and verbal abuse aimed, they say, at non-yellow vests.

At the moment, it might be tricky to wear something in France without making a P-olitical statement. And maybe for this alone, not long ago, Britain chose to offer France a different approach to expressing discontent.

You might recollect, on 8thFebruary, John Humphrys (who’d just announced his P-robable retirement from Radio Four) blushing over his microphone, when questioning the naked anti-Brexit campaigner. And during their discussion someone mentioned another word starting with P. This time was…P-rude. Whether John Humphrys is a P-rude or not is a matter of P-ersonal life, therefore irrelevant here. The media reported the rattling sounds in the studio, others were offended for having to imagine stark nakedness so early in the morning.

A week later though, nothing really changed. We are back to our daily routine, whilst Westminster is holding its nerve. Would you have imagined that a naked campaigner could P-rovoke a change in Britain, when thousands of P-rotesters and bloodshed fail to move an entire French government? I have to admit, I P-erversely thought that it could. P-ossibly. Despite my misplaced P-erversity, or hope, I sense the slow built-up towards a national nervous breakdown. (to be continued)

There is an invasion of polar bears in Russia. And the British press finally found out about it. When it happened, a week ago, the media wasn’t that interested to begin with. To be more specific, last week, the Russian authorities in the Novaya Zemlya islands declared state of emergency after dozens of polar bears entered residential and public buildings searching for food. This has been without precedent in the region and raises the climate change reality to a new level. And not just the climate change, in general, but the reality of heavy urbanism, socio-economics, pollution and many other sins of the neo-liberalist economies.

The British press wasn’t that keen on bears for reasons which can be, in part, understood. It applies the law of proximity. News is news only if it’s close enough to us. Last week, the media had a different concern. With the news about the British singer selected to perform at Eurovision, it had to re-think the strategy around coverage from Tel Aviv. And, lastly, the same media became consumed by an acute need to compete in predicting how bad things will be for all of us, once we are out of the EU. It is worth a mention that there are voices still in disbelief about Brexit. But there are increasingly more voices who question the whole legitimacy of the vote and the basis on which the Brexit process is based on.

In 2016, the Brexit referendum was primarily an electoral manoeuvre proposed by David Cameron who had become increasingly concerned with the threat posed by UKIP. The opportunism which motivated the referendum did not have the people’s best interest at heart. The government failed to articulate what Brexit really involved because Brexit was not actually supposed to happen. It was merely an exercise to get David Cameron elected and the Conservative Party united. When the politicians woke up to the shock results, the slogan ‘Brexit means Brexit’ took ground and quickly became a governmental mantra. The ministers themselves were unclear what Brexit meant and what plans needed to be in place to make the transition possible.

Two years later, after ‘heavy’ negotiations and ‘nerve holding,’ the political class is still praying for a miracle from Brussels, stocking paper and ink for the legislative system in need of restructure. In the meantime, millions of people who voted ‘pro’ or ‘against’ in 2016 are getting used to the shortage of beds in hospitals, the crowded doctors’ surgeries, the pharmacies experiencing delays in orders, the train cancelations, the ‘out of order’ buses, the increased criminality and suicide rate, the unaffordable houses. Many know, as they’ve been told in 2016, that the main problem this country has is the migration and not the polar bears nor the politics. And although people also know this is all a lie, they are too busy queuing, and put up with it. The French put up with far less.

Heritage. What does it mean to you? Family, identity, history… or something more?

The 2019 UOG Creative Writing Anthology – Heritage: New Writing VIII– is inviting prose, poetry and artwork submissions connected to the theme of ‘Heritage’ fromMonday 4thFebruary to Friday 8thMarch 2019. If you’re a student, employee or alumni of the University of Gloucestershire or Humber College, Canada, we want to hear from you!

Can’t wait to read your poetry!