Buried Gods and Metal Prophets is based on Stadnicka’s experience as a teacher at St. Stelian Orphanage, north Romania, which cared for three hundred children diagnosed with HIV and AIDS. Exposing the reality of living in state care during the Cold War, it explores the spectre of political and human tyranny that can contribute to a generational socio-cultural trauma. Buried Gods Metal Prophets explores childhood experiences during the Cold War in Romania following the Decree 770 imposed by the Communist Party in 1966. Issued as a measure meant to stimulate the population growth, the disastrous Decree 770 banned contraception and abortion, while awarding women with more than five children an Order of the Heroine Mother. As a result, an estimated twelve million illegal abortions took place between 1967 and 1989 while over 250,000 children were placed in orphanages or care homes.

Stadnicka builds a polyphonic poetic documentary inspired by Julia Kristeva’s idea that poetry can establish ‘space and infinity’ beyond the restriction of linear poetics. The juxtaposition of narratives builds a world in which the omnipresent voice of the government echoes in the mechanised communication between the state and the individual, in a society where the private ownership of a typewriter without state permission, meant prison sentence.

‘UK-based Romanian poet Maria Stadnicka’s forthcoming Buried Gods Metal Prophets, published by Guillemot Press, is an astonishing collection of poems, and a testament to the tens of thousands of children who grew up in Romanian orphanages under Nicolae Ceaușescu. Bringing together historical documents of the era, lines of other authors with her “censoring” interventions, and Stadnicka’s own moving poetry, this is the poet’s fourth collection both written and published in English.’ (Paula Erizanu, The Calvert Journal, 2021)

On 1st October 1972, having just left the Soviet Union, Joseph Brodsky wrote in the New York Times a five-thousand words article in which he condemned the political climate in Europe, and worldwide, evaluating its dangerous principles and hunger for domination and destruction. Brodsky expressed his scepticism in reference to all ‘political movements’ which he described as ‘structured methods used to avoid personal responsibility.’

Brodsky defended his belief in a different, and superior, system built on ‘personal movements – movements of the soul when a man who looks at himself is so ashamed that he tries to make some sort of change.’ The article, translated from Russian by Carl Proffer, appeared tangled, verbose and aimless; it sounded like so many other disoriented voices coming from dissidents and defectors of the era but those who managed to read it in full recognised its unswerving accuracy in describing a failing world system.

Seamus Heaney called it a moment of literary ‘vertical takeoff’, crucial in establishing the capacity of language to go farther and faster than expected and thereby provide an escape from the limitations and preoccupations of the self.

It was, in itself, a warning signal that politics became a psychological danger for humanity, as it engaged people in external fights with the Evil, which automatically made them begin to identify themselves with the Good. And when mankind begins to consider itself bearer of Good, it slides into self-congratulation. This is a state of complacency which Brodsky, who was stateless in 1972, saw it as the source of everything that was radically bad about people.

Brodsky carefully re-considers the role of an united writing community which is vital in opposing official points of view and which should support ‘personal movements’ by engaging the society in real exercises of reflection and learning. This engagement, however, is built on access to books, not articles about books; direct contact with ideas, not ‘pre-packed’ blurbs.

The PN Review editorial (January 2020) comments on the closure of nearly 800 British libraries over the past ten years. The Trump era defines how we conduct literature not only politics. ‘The triumph of the tweet’ reduces our engagement with books to a suite of emoticons, in which the responsibility for personal engagement with ideas is a constant forward-re-tweet and a sum of likes. Bring me someone who sits down to read War and Peace or a five-thousand words article in the New York Times. I’ll be either their friend or their follower.

Maria Stadnicka’s latest poetry collection Buried Gods Metal Prophets is inspired by the experiences of her siblings, who lived in a Romanian children’s home between 1978-1987. This was the period of Romania’s Communist Party’s disastrous ‘Decree 770’, which banned contraception and abortion, at the same time as awarding women with more than five children an ‘Order of the Heroine Mother’. As a result, an estimated twelve million illegal abortions took place between 1967 and 1989 and over 250,000 children were placed in orphanages or care homes.

Stadnicka builds a polyphonic poetic documentary inspired by Julia Kristeva’s idea that poetry can establish ‘space and infinity’ beyond the restriction of linear poetics. The juxtaposition of narratives builds a world in which the omnipresent voice of the government echoes in the mechanised communication between the state and the individual, as well as in the control over the process of information dissemination in a climate where the private ownership of a typewriter without state permission, meant prison sentence.

Buried Gods Metal Prophets is based on her personal experience when working as a teacher at St. Stelian Orphanage which cared for three hundred children diagnosed with HIV and AIDS. Exposing the reality of living in state care during the Cold War, it explores the spectre of political and human tyranny that can contribute to a generational socio-cultural trauma. Children are called by numbers, not by names, and even the letters they write to Santa Claus are subject to censorship.

The creative process was informed by interviews with family members, and research around childhood trauma, neglect and child language development. The book responds to what Sartre calls literary ‘commitment and substance of enterprise’, looking at survival as an act of defiance.

When I get lonely, I visit my local tip. Apart from Wednesdays, I am guaranteed to find someone about, willing to help me get rid of a load of stuff which, up to that point, had prevented me from moving on in life. One time I discarded so much of my old junk that back home I noticed the front door sign was gone, and the post box which had my name on it. I got in and a woman I’d never met before was moving about hoovering. She was wearing my shoes.

ask about someone lost

in an escape gone wrong /

they will point at a place

of returning where things

talk themselves out of paper

so loudly it is impossible

to miss them even if you can

barely hear at all / peculiar how

indoors / before too long

in furniture without memory

after many hospital visits

and the nurse has left a message

that you are now an embryo.

one, two, four then another snowfall

before your mother and I buy curtains.

It is a strange place for snow, our road,

our house and the courtyard with dried herbs

grieving for your lateness. Miracle Grow.

In hindsight, if magic existed

it would have been weaponised by now.

Trust science with your heart,

grow spare valves, ventricles for all the lies

the world tells you. The biggest deceit is

that your future is set in stone. 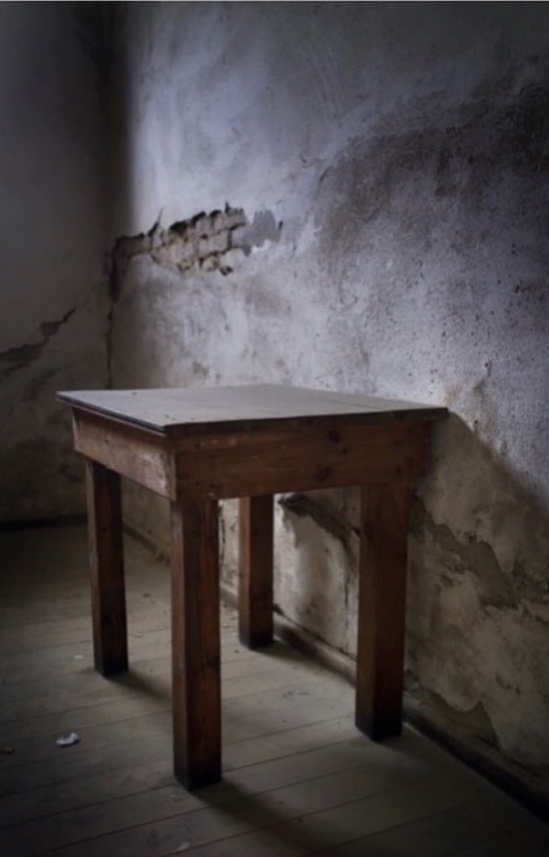