Maria Stadnicka is a writer, editor and freelance journalist based in Gloucestershire, United Kingdom. She is currently a PhD researcher at University of the West of England, Bristol, exploring psycho-social aspects of migration and socio-cultural trauma in Britain. She completed her MA in Creative and Critical Writing at University of Gloucestershire. She read poetry at Edinburgh Fringe Festival, London, Oxford, Bristol, Cheltenham Poetry Festival, Plymouth Language Club, Stroud Book Festival, Tears in the Fence Festival, Winchester University. Published collections: 'Buried Gods Metal Prophets' (2021), 'The Geometric Kingdom' (2020), ‘Somnia' (2020), 'The Unmoving' (2018), 'Imperfect' (2017). Follow on Twitter: @MariaStadnicka Copyright notice: © Maria Stadnicka, 2007-2021. All Rights Reserved. All works, writing, images, and information found herein are protected under the Copyright, Designs and Patents Act 1988. Any unauthorized reproduction or usage is in direct violation of the law and is strictly prohibited. No part or parts of this content may be reproduced, copied, modified, published, or constructed from in any way without the express, direct written permission of Maria Stadnicka.

‘Somnia’ was launched last night at the Museum in the Park, the Pavilion Garden Room. Beautiful photography from Nikoletta Monyok and it has been a joy to  share the evening with the gifted writers Caroline Shaw, David Clarke, Adam Horovitz and Philip Rush. Thank you Uta Baldauf for a memorable performance, and to Caroline Rush, Philip Rush and Fred Chance for making the launch possible. Thank you for the generosity of our host, The Museum in the Park, to painter Mark Mawer for his artwork, Alec Newman and The Knives Forks and Spoons Press. It felt so special because there were so many people who attended, despite the bleak and windy weather on a Thursday evening. ‘Somnia’ THANKS YOU!📖

Further details, on the ‘reviews’ and ‘books’ pages.

‘Somnia’ is available here and here.

The simple grey and black cover of this book –texture perhaps taken from a tree or wall, with a white crack or line separating author’s name and book title – is in many ways apt for what the reader find inside: a collection of beguiling, uneasy poems that probe ideas of love, politics and human experience.

The work reminds me of Charles Simic’s and Yannis Ritsos’ poetry (I don’t mean it is derivative), and also the gentler end of Vaska Popa’s work. There is the same clarity of images and voice with little metaphor or allusion. Instead a kind of surrealism is at work in the direction the narratives take, in the thought processes being evidenced with their jumps and asides, their sometimes awkward and surprising conclusions. In ‘Settlement’ the narrator has ‘no further questions’ for God, so instead offers him a ham sandwich; in ‘Bad Luck’ the poem moves from a fall through Googled medical self-assessment to burns and then self-immolation, but even as the house burns a neighbour pops in to talk about the weather and running out of tea bags. In ‘Good Bye Then’ Clara’s ‘giggle melted in a slice of bread’.

As Jay Ramsay points out in his back cover blurb, in many ways this poetry is ‘other’. This may be because of Stadnicka’s experiences growing up in Romania, the effect on her of the Cold War, a slight awkwardness in the details of English (e.g. ‘Good Bye Then’ or ‘it stopped me / understand the real life’) or simply her poetics. Whatever, Stadnicka has now found a home in Stroud, in language, and clings on to a hope that underpins the poems, even if this is belied by poems like ‘The Calais Sea’, where

After weeks and weeks of travels,

for the last time, I put my bags down.

I am done with hope.

of what I could be if

we had the right words for tomorrow.

Elsewhere, in a world of inevitable death, madness, broken families, soldiers, barbaric politics and dehumanization, even when there are ‘no other survivors’, ‘even without a language’, Stadnicka defiantly demands that she ‘go on / being allowed to hope’. And does.

This an exciting and urgent first book of poems, that gives me hope for contemporary poetry. I look forward to the next instalment of Maria Stadnicka’s questionings, rememberings and imaginings.

Last month, I was delighted to attend the launch of a new book of poems by Maria Stadnicka, a Romanian-born poet living and working in Stroud. Before coming to the UK in 2003, Maria worked as a radio and TV broadcaster, presenter and radio editor. She also won a series of national poetry prizes. In 2010 she became member of the Stroud Writers Group, Gloucestershire.

I first become aware of Maria’s poetry when Yew Tree Press published her beautifully illustrated short collection A Short Story about War (as Maria Butunoi) in 2014 and her new poems, collected in Imperfect (also Yew Tree Press), are a welcome addition to her English-language work. Maria’s poems are restrained and precisely crafted miniatures: 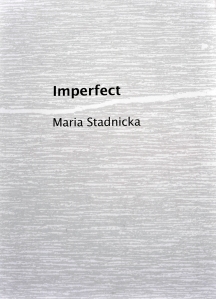 enigmatic narratives shot through with dark humour and surreal detail, they are eminently political, but rarely tackle Politics (with a capital P) head on. In all of these respects, they put me in mind of the work of Greek poet Yannis Ritsos, yet there also seem to me to be echoes of Kafka: the poems record fragile surface realities, beneath which lurk the symptoms of violence and oppression. This is a poetry of unease, and all the more honest for that, but also ultimately a poetry of hope, recording the struggle of the subject to maintain its integrity in troubled times.

Maria has agreed to feature as my guest poet in this post, which presents here poem ‘City’. Of the poem, Maria writes:

‘What can I know?’….’What can I know?’…This is not my question. Immanuel Kant answered it already, a long time ago, and many other thinkers answered it in their own way too. As a society, we slowly learnt to get used to ‘knowing’ everything a priori. When there is no obvious difference between ‘freedom’ and ‘dogma’, what is the point in asking? Everything is ‘google-able’, right?

Happy to be given the answer, happy to steer clear of uncomfortable dirt and pain. Happy and safe. But isn’t that called oppression?

Recently I have been thinking about oppression and the subtle nuances revealed by urbanism. The layers and layers of conformity which are impossible to eradicate without consequences. But then… how else shall we build consensus?

And one afternoon, walking through my working class town, out of the blue an answer kept staring me in the face. There was the rain and the shops closing at 5 o’clock and people hurrying to get the dinner ready. There was an English February, defined by our sleepwalking hyperreality. Me and everybody else: surrendered, crushed.

This afternoon we passed the city prison walls
fighting the wintry wind with a broken umbrella.

It was precisely five o’clock and
a girl on a bicycle overtook an old man
holding a rope.
About the same time,
the ice cream van closed.

The armed police arrived
to disperse the queue with tear-gas.

In the near distance, people ran
between horizontal watermarks
back to their semi-detached
airing cupboards.

We had nothing to stop for and then, I think,
I paused and
I covered my arms with a piece of history.

Imperfect can be purchased by contacting Yew Tree Press (philipalrush[at]googlemail.com) or via Amazon.

This is it. The book is done, the summer arrived. ‘Imperfect’ is published by Yew Tree Press, Philip Rush, Stroud, Gloucestershire, UK and printed by Andrew Morrison, Stroud, UK. Price: £10 with free P&P.

Please order the book at mariastadnicka@yahoo.co.uk

The box arrived. The first books now being sent to the British Library. And, in the middle of it, a new poem published this morning in ‘International Times’ – the newspaper of resistance. 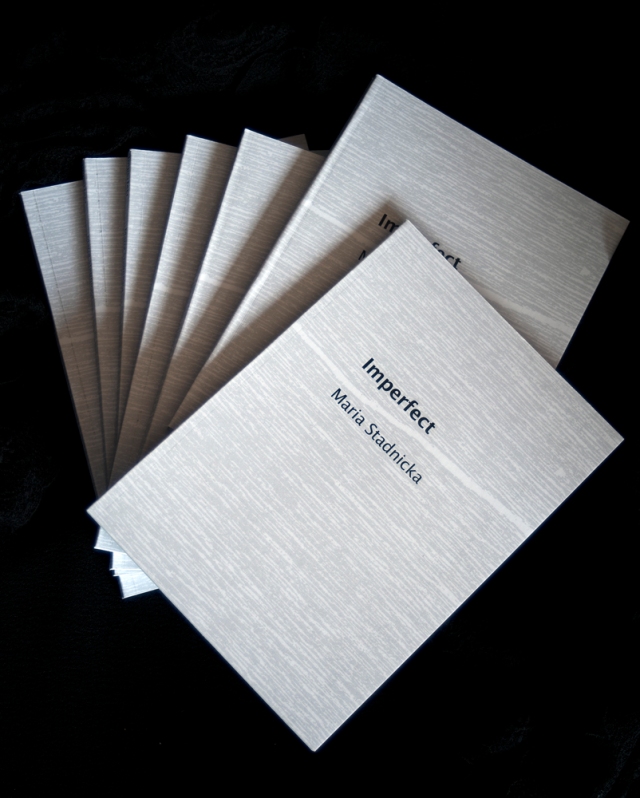 ‘A Day at the Office’ – pre-election dossier.

We had to stop the car several times.

It had a natural birth and I called it ‘Imperfect’.

The book is available for pre-order at mariastadnicka@yahoo.co.uk.

The evening will be a vibrant performance with poetry and music, featuring Maria Stadnicka, Adam Horovitz, Jay Ramsay, Katie McCue and ‘Souled and Healed’.

Books, drinks, sounds will be available! Come along!